Paying dues and don'ts: The beginnings of Lucky #7 and one rock musician's apprenticeship

Summer 1978: I was just out of my teens. My military family was leaving me behind in Southeastern California as my Dad was offered a choice last tour of duty in Hawaii. With 6 kids, it was time to kick one or two of the older ones out of the nest anyway. I'd previously left home a few times as a teenager and made a go of independence, yet was always welcomed back for a bit when things got rough. This time it was the real deal. "There is no free lunch" as my dearly departed Dad used to say. Fair enough. I soon found myself relatively broke, doing grunt construction work when I could find it to keep myself in rent, guitar strings and Top Ramen. I found lodging in a tiny, run down rental house right next to the 10 freeway in Yucaipa California. I paid rent by putting pre-fab sheet metal roofs on industrial warehouses owned by my landlord Henry. This involved a high powered drill in the 100-plus degree heat of the blazing California desert sun, for $3.00 an hour (most of which went right back to Henry). Imagine the joy. But hey, what did I care? I was young, healthy and playing guitar in a few struggling little bands at parties for beer on the weekends and flirting with pretty young girls who would buy me the occasional meal at Denny's. Ah, the resilient innocence of youth.

Just before my parents left for the tropical splendor of the 50th state they were kind enough to offer to co-sign a loan for me. They suggested a more reliable used car to replace my consistently broken down 56 VW Beetle, but of course, I had my own priorities. I'd grown tired of my first guitar and felt it was time to get a new and better one. After walking miles back and forth to the handful of music stores of nearby San Bernardino I wandered into Lopez Music. The store was down the west end of E street where my high school buddies and I had hung out on Friday and Saturday nights just a few years earlier, driving around listening to The Rolling Stones, David Bowie, Uriah Heep and ZZ Top on our 8 track tape players. After I showed Mrs. Lopez a magazine photo of a then-young Keith Richards on stage, she opened a large glass case, winked through her cat eye glasses and carefully handed me my future. It was love at first sight. I was a scrawny little long haired kid and it seemed to weigh a ton. We plugged it into an amp and I began to play. 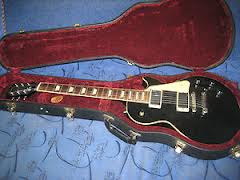 I recall the eerie feeling that one gets upon meeting someone you inexplicably feel as if you've known forever. Not only did the riffs I already had feel and sound better but new ideas began to spark in my brain and run instantly down to my fingers. I knew then and there that I would do almost anything to have this guitar. After a pleading call to Mom, who drove down from nearby Yucaipa to meet me at the store, I left with my black 1977 Gibson Les Paul Standard which I am still playing to this day. The deal was that Mom and Dad would make the down payment, but that I was responsible for the monthly ones from then on over the next few years. Since then, over many thousands of miles, through countless joys, heartbreaks, births, deaths, trials and tribulations, old Lucky Number Seven (as Cracker fans long ago dubbed it ) has rarely left my side. I vividly remember scrambling to make my guitar payments from the meager earnings of a series of temporary construction jobs. When money got really tight a few times, my brother and I figured out a scheme to make some immediate cash. Having no working car (the Beetle's transmission had fallen apart) we began regularly hitchhiking down the 10 Freeway to San Bernardino to give blood for $12.00 a pop. These being the pre-AIDS-screening days, these blood banks were often filled with homeless guys, ex-cons and the like, looking to make some fast booze cash. Then, depending on how we felt, we would sometimes hitchhike another 20 miles to the blood bank in Fontana to do the same thing. We did this once or twice a week until Mom found out and put a stop to it all the way from Hawaii. She would have rightfully thrown her shoe at our heads if it were possible to fling it over the ocean.

During this time I worked as a bartender, an ice cream truck vendor, construction site grunt, night delivery truck driver, whatever job I could find until I was invited to join the only cover band that I have EVER joined, The Tom Harper Band. There was no Tom Harper…it was a name composed of the first syllable of each of the band members’ last names. Being the last to join I, didn't even get a syllable. (Just as well, perhaps.) These were mostly older guys who liked having the flashy, hot shot kid guitarist in the band. We would play weekends at a lodge in the mountains that the bass player's girlfriend's dad owned. He fed us dinner and sometimes let us stay in a cabin where the boozed flowed and the chicks came out of hiding once we knew he had left for the night. In retrospect, this chapter of my youth was a great learning experience for me, as the elderly proprietor wanted us to start the dinner hour playing the fluffy, light duty hits of the day like "Margaritaville.” The 5-to-7 set was a snooze fest for me. It did however teach me a lot about dynamics - the importance of being able to play at a whisper volume, then work up to wailing away like a madman as the crowds got rowdier by late night. That's when the Zep and Foghat covers came roaring out to a house full of happy, howling drunks. In general, I was loving my apprenticeship…for a while anyway. I was woodshedding at home on weekdays, writing my own riffs and songs. Unlike many of my contemporaries I really had no long term plans of ever doing anything else aside from playing music. I soon tired of the cover band/human-jukebox scene which seemed fine for my band mates (who I think just wanted to hook up with divorcees and smoke a lot of weed). I wanted …needed to go as far as I could with this guitar..... Changes would come sooner than I expected.... 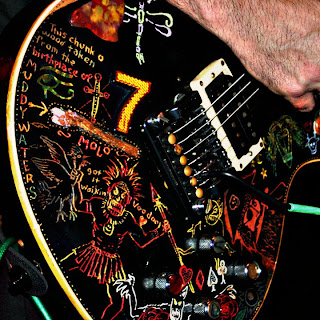 Posted by Johnny Hickman at 6:58 PM