The lead singer / lead guitarist relationship is the classic core for myriad rock bands throughout history. David’s and my first encounter was probably not all too different from that of countless other bands, but in our case, the actual partnership did not begin for another decade or so.

Around the time of our first casual meeting, I was attending haircutting school by day (I'd heard Chuck Berry started that way) and tending bar at night for subsistence money, while living in a storage room at the back of my girlfriend's grandmother's house. I had begrudgingly concluded that I needed the proverbial "real job"…at least for a bit while I continued trying to wedge my foot into the doorway of the music world. I had heard through a friend that there was a guy named Ricky who was starting a "new wave" band. I was amazed that there was anyone else in the Inland Empire (the vast cluster of formerly thriving yet now decaying industrial cities east of Los Angeles) vaguely interested in punk and new wave. This was the era of Judas Priest and Journey. I went to suss it out, arriving at a small older house with music equipment dominating the entryway and front room. It became clear as we hung out that Ricky was looking to have some fun playing new wave covers. At this point I was more interested in writing and playing original music, but I stuck around for a bit that day anyway. At one point that afternoon, a tall slender kid with longish red hair came in with a big Fender bass. He had on a long, green military parka like the mods in England wore which made him instantly cool in my book. We shook hands and he said "Hey man, I'm David". Like me, he seemed to be walking the line between rock and roll and punk, trying to figure it all out and likely also realizing that we were a very tiny minority in The Inland Empire at that time. The three of us jammed a bit, hung out and talked about the cool music coming from the UK, punk, ska, new wave, noise rock, early goth etc. A band did not form, but I remembered that David guy. Although a few years younger than me, he was easily the hippest, most musically aware dude that I had met by that time.

Over the next year I went on to form The Dangers with Chris LeRoy, Bob Kjorvestad and an ever-changing cast of local punks on bass and drums. (Dangers blog post coming soon...) Running in the same circles of musical misfits and weirdos, David and I would occasionally cross paths. He enrolled at U.C. Santa Cruz in Northern California but came back down to Redlands on breaks, his fledgling bands like Sitting Duck sometimes playing at parties with The Dangers. He and some friends once came over to my place for a small party. David had brought a nice stack of vinyl from England where he had recently visited his mom's side of the family. I had a decent collection of American punk vinyl like Fear, The Ramones, The Germs and The Dead Kennedys, but I was impressed with Lowery's stack….many of them records that were relatively unknown and as yet unavailable stateside. We all sat around on the carpet sipping gin and limeade and listening to great bands from both sides of the Atlantic….. The Sex Pistols, The Clash, Talking Heads,The Damned, Adam and The Ants, and our beloved Buzzcocks who still influence us to this day. There were only a handful of our kind--musicians with a interest in new sounds--around Redlands then; David, Chris LeRoy, Bill "Shakespeare" McDonald (of "Where The Hell Is Bill?") fame, and me. By this time we had also met and hung out with the teenaged Victor Krummanacher and his posse of kid punks from nearby Riverside. There was also a band called The Reactors featuring Tony Fate on guitar, Mike Gonzalas on bass, and a tough-as-nails, 5-foot-tall female singer named Dash…arguably they were one of the very first punk bands in the Inland Empire, if not in all of Southern California.

In that era it was “us” against “them” ... “them" referring to the long-haired, heavy metal loving "dirt heads" as we called them. They drove by in their muscle cars jeering at us with our short spiky hair, boots and trench coats. They threw rocks at us, called us DEVO (huh?!), tried to crash our parties and kick our asses. 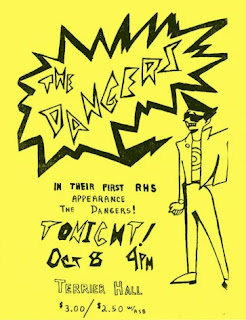 Despite all of this, The Dangers were writing our own songs and consistently selling out The Barn (the on-campus rock club at The University of Riverside). The anecdotal TV news stories from England about “booted hooligans” causing riots had the local PD a little amped up at the very sight of anybody dressed like us. Between the dirt heads and the party-busting cops we persevered and loved our scene all the more for the opposition. I was also playing with a hard core punk band who never could decide on a name (and who were actually billy clubbed once for not leaving our party gig fast enough once the Redlands P.D. had had enough complaints). Lucky 7 and I were popping up all over the I.E. music scene, for better or worse.

When David came back to Redlands on school breaks, we would sometimes get together at his parents’ house and play music as a casual ensemble called The Estonian Gauchos. We would swap instruments often in The Gauchos. I played drums, and David switched from bass to guitar on a lot of songs. (Few people know that he played bass guitar first and he was in fact quite good.) The Gauchos experimented with our interpretations of ska, European folk, pop, old timey country, rub-a-dub reggae, whatever felt fun. The Lowery family dog had it in for me and used to try to bite my ass for making such a noise on the drums. Like my parents, Gene and Betty, Mr. and Mrs. Lowery were encouraging of all of our musical endeavors. David and I were both very fortunate in that regard. This loose collective included David L, original CVB multi-instrumentalist Chris Molla, David McDaniel (who later gave Camper Van Beethoven their name), Mark Phillips, and me. The Gauchos were the seed that eventually grew into Camper Van Beethoven. I remember The Gauchos playing a party one evening in the Lowery back yard (naturally drawing the Redlands police). I vividly remember David's Genuine Miller Draft being angrily set down on the patio as he proclaimed "This isn't Poland…we can make as much noise as we want until ten o'clock!" Plucky and courageous….all six feet and 130 pounds of him. Dryly witty and impressively sharp he was, even in his youth. I think that moment was when I really began to love the guy. Between the wild, high speed power pop and punk of the Dangers and the innocent yet worldly musical experimentations of The Estonian Gauchos, this would become the most pivotal year of my musical journey…and this was only the beginning.
Posted by Johnny Hickman at 2:24 PM